Visually impaired folk have fun in the sun after two years 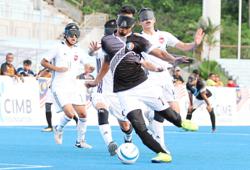 Steady pace: A visually impaired resident of St Nicholas’ Home for the Blind running with the aid of a sighted guide runner, who is attached to her with a hand band, during the home’s annual Sports Day in Pulau Tikus. — CHAN BOON KAI/The Star

GEORGE TOWN: After two years of being cooped up at the St Nicholas’ Home (SNH) for the Blind due to the Covid-19 pandemic, Khoo Chong Tian was excited about getting to do recreational activities outside.

With the help of a sighted runner, the partially blind 18-year-old ran confidently to the finish line during the home’s annual Sports Day on Thursday.

“I felt better having a guide runner with me. To build my confidence and stamina, I trained by holding and following railings along paths twice a week,” said Khoo, who was born with glaucoma.

Lee Wei Quan, 20, who has limited vision due to nerve problems, expressed her joy at being allowed to run at full speed.

“Sometimes I’m a bit afraid of trying something new since I can’t see clearly. It felt wonderful to run with a guide runner.

“I rarely go running and only started practising with my guide runner and team members prior to joining the Sports Day running event,” he said.

First-time guide runner Vincent Ko, 18, said he felt proud to be able to guide the blind in a foot race.

“The only challenge was to ensure that the runner stayed in a straight line. It was an eye-opener for me to guide the blind while running at high speed,” he said.

“I was beyond proud of my runner. He inspired me and in fact, he was the one leading me in the race.

“When the blind and visually impaired residents were playing games, we clapped to get their attention and guide them to be on track,” he said.

The home’s residents revelled in many sporting events including tug of war, shot put, futsal, a gunny sack race and telematches.

The 100 staff members, volunteers and residents of the home did not let the morning drizzle dampen their spirits.

The home’s general manager Carmen Chew said the aim was to get the residents to have fun.