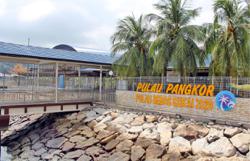 IPOH: Tourists' preference for the land-and-ferry route to Pangkor could be one reason why flights from Subang to the island have been suspended, says a Perak exco member.

Tourism committee chairman Datuk Nolee Ashilin Mohammed Radzi noted that flights have been suspended since May 29.

"I was told that it was a business decision," she told a press conference after the launch of the police tourism unit and a town hall session on safe tourism at a hotel here on Thursday (June 23).

"It's more on (tourist) preference, like how the flight from here to Kuala Lumpur was not so popular due to the distance," she said, adding that the number of tourists to Pangkor has not dwindled.

"Tourists can travel to Pangkor from Kuala Lumpur via the West Coast Expressway in about two hours," she added.

Perak Parti Amanah Negara Youth communications director Mohd Ikhmal Mohd Iskandar had reportedly voiced his disappointment over the suspension of the flights by SKS Airways despite just being launched in January.

Nolee Ashilin said she understood and respected the decision by SKS Airways but hoped the airline would reconsider.

"We hope they can look into it (resuming the flights).

"Maybe they can have chartered or scheduled flights during peak seasons," she said.