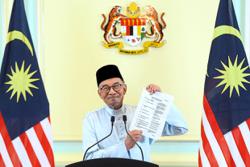 Ahmad Husni was on the witness stand at the High Court on Wednesday for a cross-examination by Muhammad Shafee, who represented former prime minister Datuk Seri Najib Razak where he (Ahmad Husni) was asked about letters relating to 1MDB that were signed by him.

Ahmad Husni said letters addressed to the Finance Ministry would go through several stages before they reached him for further action.

However, letters regarding 1MDB or its subsidiary SRC International Sdn Bhd would be sent straight to the finance minister (Najib) before reaching Ahmad Husni.

"Letters would be sent to me except for 1MDB and SRC which will be sent to Najib," the witness said.

Muhammad Shafee then questioned how a particular 1MDB letter had reached Ahmad Husni.

"I already said it, you have to listen to what I said. For matters relating to 1MDB and SRC, he (Najib) would send it straight to an officer.

"This letter is not from 1MDB to me but from the Finance Minister to the (unnamed) officer before it came to me.

"All the 1MDB and SRC letters were handled by the Finance Minister," Ahmad Husni replied.

ALSO READ: I received RM30,000 a month but did nothing for 1MDB, says Sidek Hassan

Muhammad Shafee: Then why did you sign this letter?

Ahmad Husni: Because this letter required my signature.

Muhammad Shafee: You just said 1MDB and SRC letters were handled by the Finance Minister, so why did you sign this?

Ahmad Husni: When it came to me, that is the procedure. I have to sign. He (Najib) has the power and 'saya yang menurut perintah' (I only obey). That's how it works.

The witness further said that when it came to the Finance Minister, the two "projects" - 1MDB and SRC - would not follow the standard operating procedures (SOP) of all companies under the Finance Ministry and the Minister of Finance Inc.

"It all comes from the top. And I was asked to sign. What can I do?" Ahmad Husni lamented.

Muhammad Shafee said the witness should shed a light on the matter to which Ahmad Husni quipped "you didn't work there, you don't know anything".

Muhammad Shafee: That's why I'm asking you! Because you should know!

The tone of the questioning was already heating up with the lawyer telling the witness not to quarrel with him.

Ahmad Husni: I am not arrogant!

Muhammad Shafee: You are arrogant!

Ahmad Husni then turned to the presiding judge Justice Collin Lawrence Sequerah and said Muhammad Shafee "was only trying to find blame with others".

The judge "stepped in" to remind the witness to answer questions from the defence lawyer.

Justice Sequerah: He (Muhammad Shafee) has a duty (as a lawyer).

Ahmad Husni: Duty pun kena honest lah. (Even if you have duty, you have to be honest).

Justice Sequerah: The prosecution will give you an opportunity (to explain your answers) during re-examination. You will have the last say.

The judge then ordered the proceedings to take a short break.

Hearing will resume on Wednesday afternoon.

Najib is on trial for 25 charges in total - four for abuse of power that allegedly brought him financial benefit to the tune of RM2.28bil; and 21 for money laundering involving the same amount of money.