The Sarawak Premier said this was part of the state's commitment to clean energy, limiting global warming and reaching net zero emissions.

"Transport bears a huge responsibility for the current situation. The sector contributes to nearly a quarter of global energy-related greenhouse gas emissions.

"In a business-as-usual scenario, this figure will continue rising to reach one-third of all emissions by 2040," he said when opening the fifth International Digital Economy Conference Sarawak (IDECS) here on Tuesday (June 21).

To address greenhouse gas emissions from the transport sector, Abang Johari said the state government introduced a number of hydrogen-powered buses in 2020.

He said a hydrogen-powered autonomous rail rapid transit (ART) system was also in the process of being introduced in Kuching.

In addition, he said smart traffic lights had been implemented at 42 junctions in Kuching and its surrounding districts.

"Traffic data is used to synchronise the traffic lights to reduce congestion, travel time and greenhouse gas emissions," he said.

The first 300 towers are targeted for completion by the third quarter of this year and the rest by the fourth quarter of next year.

In relation to this, the Sarawak rural broadband network (MySRBN) will be extended across all 600 towers to provide home broadband services for 100,000 rural homes in the next few years. 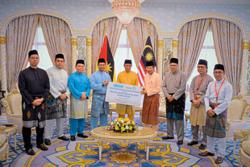