PUTRAJAYA: Khairy Jamaluddin has ceased his legal battle against a court ruling that he is liable for defaming Datuk Seri Anwar Ibrahim over a statement he made 14 years ago.

In the Federal Court, a three-member panel by Judge Datuk Nallini Pathmanathan struck out two leave applications to appeal filed by Khairy, with RM5,000 in costs for each appeal.

This was after Khairy's counsel Sarah Abishegam informed the court that they had written to the opposing side for the withdrawal of the leave applications in April 2022.

Khairy sought the leave to appeal the Court of Appeal's ruling that he is liable for defaming Anwar and another decision by the same court dismissing his appeal to amend the statement of defence with regard to the defamation suit filed by the Opposition leader.

Earlier, Sarah offered costs of RM1,000 for each appeal on grounds that the withdrawal was made at an early stage.

"We filed the motion on March 7 and the matter came up for ereview (at the court) on April 6.

"There was a hearing date set on Aug 11 for this matter. We actually wrote to the opponent for the withdrawal of the appeals in April," she told the panel, which includes Justices Datuk Zabariah Mohd Yusof and Datuk Rhodzariah Bujang.

Anwar's counsel Datuk Seri Gopal Sri Ram said the sum of RM5,000 in costs for each appeal before the apex court is reasonable.

"The motions (applications for leave to appeal) which were served on us comprised 10 volumes. We had to respond to the points raised and my learned friend appearing with me, Ms Leela, also prepared the draft submissions," he added.

On Feb 7 this year, the Court of Appeal dismissed Khairy's appeal to challenge Anwar's defamation suit after ruling that there was no appealable error that warranted appellate intervention.

Judge Datuk Darryl Goon Siew Chye, who read out the decision, said the impugned statement uttered by Khairy, in the choice of analogy and figure of speech within the natural and ordinary meaning, was capable of being defamatory to Anwar.

The Court of Appeal also affirmed the High Court's decision and held that the damages of RM150,000 awarded by the High Court to Anwar was not manifestly excessive.

On March 7, 2008, Anwar, who is PKR president, sued Khairy, who was then youth and sports minister and Umno Youth vice-chief, for allegedly uttering defamatory words about him during a ceramah in Lembah Pantai on Feb 20 the same year which led to a video clip titled "Anwar and kin no threat" posted on a news portal.

The judge also dismissed Khairy's application to amend his statement of defence to say that his remark was a fair comment.

Khairy subsequently filed the appeal against the High Court ruling but in February 2018, the Court of Appeal struck it out after allowing Anwar's counsel's application to annul the notice of appeal.

On Dec 15, 2020, the Federal Court allowed Khairy's appeal for his case to be reheard on its full merits at the Court of Appeal. – Bernama 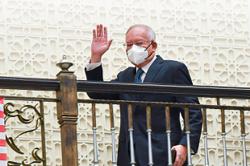