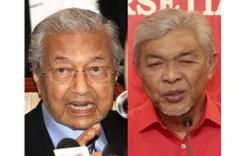 David Tan Siong Sun, 47, said this during examination-in-chief by lead deputy public prosecutor Datuk Raja Rozela Raja Toran when he was referred to the ledger in the corruption trial of Ahmad Zahid.

The ledger contains details of payments made by UKSB to several individuals between 2014 and 2018.

When Raja Rozela asked Tan whether he named Ahmad Zahid in the ledger, the witness replied, "no.”

"The reason I used the code name ‘monster’ is because during (the time), I entered the ledger while I was eating the Mamee Monster snack,” he said.

The 15th prosecution witness, former UKSB director VK Lee, had earlier told the court that “KJ” and “bomoh” were among words recorded in the UKSB ledger which was presented in the trial of the former deputy prime minister.

Tan also said he used the code names because he was worried that the ledger might be exposed to other people.

Raja Rozela: Anyone (else) knows about the code names?

Tan: Nobody, only me.

When reading out his witness statement, he said he kept records of all the payments made to Ahmad Zahid from 2014 to 2018 for his personal record because the amount of cash involved was huge.

"I prepared a ledger using Microsoft Excel on my personal laptop. I’m not an accountant by training, so the ledger was just a simple record of money in, money out,” he said.

He added that the main entries in the ledger are the amount available for each month, the amount withdrawn, and the name or nickname of the intended receiver.

"The individuals named in the ledger include ministers, politicians and government servants. Usually, I would key in the entries daily but on some busy days, I would write down on a piece of paper first before keying in the details in the ledger later in the day or the next day,” he said.

Ahmad Zahid, 69, is facing 33 charges of receiving bribes amounting to S$13.56mil from UKSB for himself as then home minister to extend the contract of the company as the operator of one stop centre service in China and the foreign visa (VLN) system as well as to maintain the contract agreement to supply the VLN integrated system to the same company by the Home Ministry.

For another seven counts, he was charged with obtaining for himself S$1,150,000, RM3mil, Euro15,000 and US$15,000 from the same company which has official links with his official duty.

He was charged with committing all the offences at Seri Satria, Precinct 16, Putrajaya, and Country Heights Kajang between October 2014 and March 2018.

Ahmad Zahid pleads not guilty to another amended charge