Seremban Fire and Rescue Staton operations officer PGK II Jefri Uzus said a team was rushed to the scene at about 8.05pm.

"The landslide caused damage to the transformer at the sub-station. Two vehicles, a Mercedes-Benz and a Volvo, were also damaged by fallen trees due to the landslide.

"However, there were no casualties, but residents in the vicinity and the surrounding areas are advised to be vigilant and report any untoward incidents to the authorities immediately," he said in a statement here Tuesday (June 14).

In another incident, Seremban 2 Fire and Rescue Station operations officer PGK II Harzizi Hasim said a fire broke out at the ironing room of a boy’s hostel near here at about 2am today.

The fire caused 40 per cent damage, but there was no casualty involved, he added. - Bernama 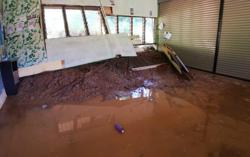