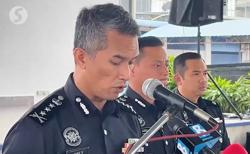 "The traps were found during a routine patrol by patrol boat Kilat 26. Our personnel spotted several suspicious buoys in three different locations. Upon checking the area, we found 40 illegal fish traps set by irresponsible individuals," he said in a statement on Thursday (June 9).

He said the traps are worth about RM4,800, were confiscated and have since been brought to the Batu Uban marine police jetty for further action.

Capt Abdul Razak said the use of bubu naga, each set made up of several interconnected traps, was prohibited as it could adversely affect fishery resources due to its shape and length.

"It could also affect marine biodiversity," he added.

Capt Abd Razak advised fishermen in the state to adhere to the law and not to violate the terms of their licence.

He added that the owner of the traps could be prosecuted under Section 11(3)(c) of the Fisheries Act 1985 for using illegal fishing methods.

He said MMEA would continue to monitor the ocean for signs of illegal activity and urged the public to immediately report any maritime offences.