YANG di-Pertuan Agong Al-Sultan Abdullah Ri’ayatuddin Al-Mustafa Billah Shah is known for being a humble, wise and high-calibre Ruler as well as a keen sportsman.

Deputy Communications and Multimedia Minister Datuk Zahidi Zainul Abidin said the King is very close to his subjects regardless of their background.

“Tuanku is easily approachable and the rakyat can discuss any issues with him directly,” he said in an interview.

Zahidi added that the King has in-depth understanding of social, economic, political and sports matters. “Based on my experience, Tuanku has vast experience in handling many roles that showcase his true leadership, especially when he is involved in sports associations like football,” he noted.

Sultan Abdullah served as president of the Football Association of Malaysia between 2014 and 2017.

“When I was holding the Malaysian Chess Federation (MCF) president post, the King showed great interest in the game and gave ideas on how to develop the sector in the country,” said Zahidi, who is MCF’s former president.

“There is no barrier between the King and his rakyat. In his heart, Tuanku will always put the interest of the country first,” added Zahidi.

During the Covid-19 pandemic and natural disasters such as floods, the Yang di-Pertuan Agong and Raja Permaisuri Agong were among the first to help those in need.“Their Majesties’ exemplary leadership must be learned and respected by all levels of the community,” Zahidi said. MCA spokesperson Chan Quin Er said in times of political instability, Sultan Abdullah was able to stabilise a divided nation and preserve its unity by wielding his moral authority with care and tact.

“The King exerted his authority in a prudent and suitable manner, and still does. The King regularly visits his subjects after disasters such as floods and car accidents, showing that he really cares.

“Tuanku also encourages his subjects to better themselves by emphasising the importance of education and excellence,” noted Chan.

“Tuanku makes obvious efforts to congratulate his subjects on their achievements – Malaysian Harvard students, competition winners, teachers who win awards and others – nothing deserving of congratulations escapes his notice.

“This way, Tuanku was able to comfort the nation and preserve its unity during the pandemic.

“The King also serves as the nation’s mentor and conscience. Tuanku possesses all the basic characteristics of kingly behaviour.The King continues to be a reassuring presence who transcends day-to-day conflicts with his royal persona. “Tuanku exudes virtues including peace, harmony, loyalty, discipline, sincerity, generosity and moderation through his speeches, public appearances and regal rites,” said Chan. The King presenting a donation to an underprivileged child during a programme at Masjid Kampung Kuala Penor in Kuantan in June last year. — Photo courtesy of Istana Negara’s Facebook page

Raja Permaisuri Agong Tunku Hajah Azizah Aminah Maimunah Iskandariah also contributes to the preservation of the King’s reputation through her humility and gentleness, she added.

Muar MP Syed Saddiq Syed Abdul Rahman said he was grateful to be able to serve under the King, who has steered Malaysia out of many crisis zones.

“Tuanku’s wisdom and consultative approach have gotten us peace and stability in tumultuous times.

“The Constitution has always been a reference point by Tuanku during these challenging times. Malaysia has benefited a lot from this,” said Syed Saddiq.

“His Majesty has adapted very well when it comes to empathising with all levels of Malaysian society. Tuanku is able to feel the pulse, recognise their aspiration and comprehend the rakyat’s fears. You cannot do this if you lack empathy and are unable to tune in to what is happening on the ground,” said Najib. Chan says the King stabilised a divided nation by wielding his moral authority with care.

“The fact that Tuanku can easily engage in conversation with the common people and set aside royal protocols, even stopping by the roadside to buy local delicacies from small business owners, or stopping to help a road accident victim, shows Tuanku’s genuine interest in and concern for the common folk,” added Najib.

The Pekan MP also noted that the constitutional monarchy is the “glue” that binds Malaysians of all backgrounds together.

“His Majesty is rightly the object of loyalty and affection of all Malaysians. That is the way it should be. We must not forget that the second pillar of the Rukun Negara is Loyalty to the King and country,” he added.

Najib, who is the former Pahang Mentri Besar, said Sultan Abdullah was already the Crown Prince of Pahang when he was holding the Mentri Besar post.

“I was Tuanku’s neighbour in Pekan when Tuanku was the Crown Prince, as my ancestral home has always been beside Tuanku’s. “As the MP of Pekan since 1976 and as the Orang Kaya Indera Shah Bandar (one of four highest ranking royal nobles of Pahang), I am humbled and greatly honoured to say our relationship is not new.

“My late father was also a close friend of his late father,” said Najib.

He added that the constitutional monarchy must be preserved as it is the vital foundation of national unity and stability.

“We must learn and support

His Majesty in his quest to see Malaysians united. 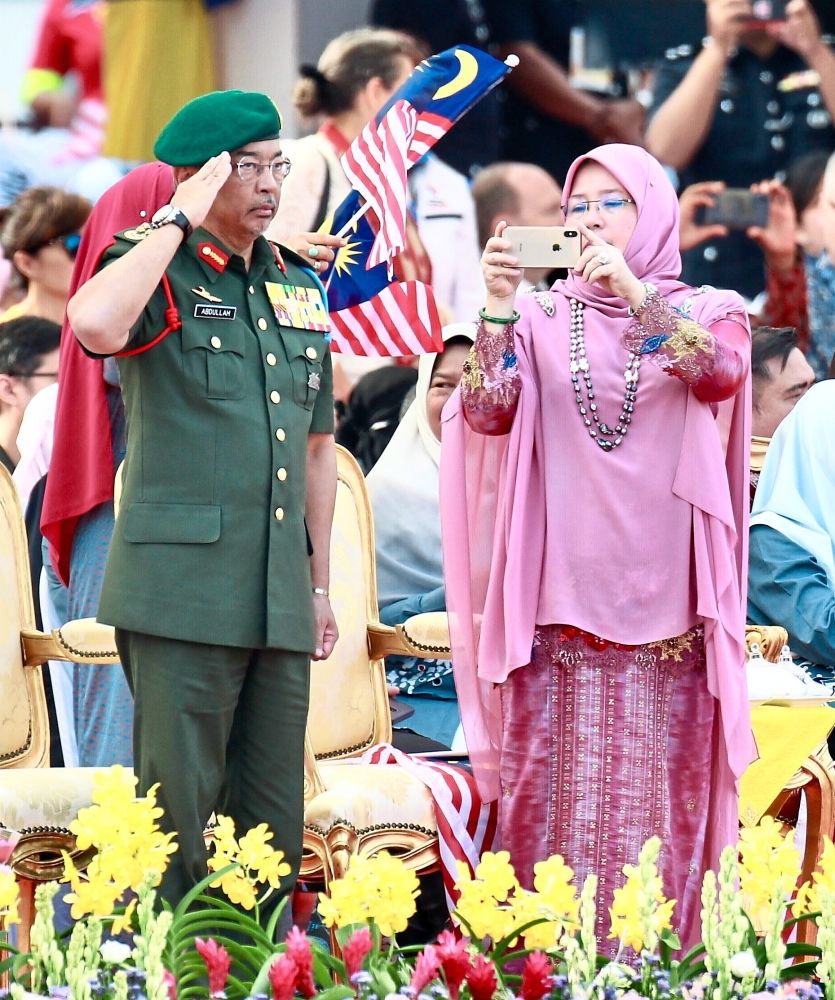 “In this scenario, a peaceful coexistence based on the celebration of diversity is the norm and not the exception,” said the former prime minister.

He also wished Sultan Abdullah a long and prosperous reign.

“I wish Tuanku the very best of health and that Malaysia under his reign will realise new heights and reach greater milestones.

“Malaysia will prosper by providing better-paying jobs for all those who seek them, first-class yet affordable healthcare and an education system that will prepare our future generation to thrive in a robust and green economy with equal opportunities for all.

“May Allah always protect the King and Her Majesty the Queen and their family,” said Najib.

How is the Yang di-Pertuan Agong elected?

History of an esteemed institution

The King’s roles and duties

Symbol of royal legacy and glory

Mix of old and modern charm

Dear to the people’s hearts