Some of the participants at the town hall on Sabah's inland foreigners.

KOTA KINABALU: Sabah is set to go ahead with the issuance of a special foreigner card for migrants including refugees and stateless people broadly dubbed "inland foreigners”.

These "inland foreigners" were Filipino refugees issued with Immigration Pass (Imm13), Special Task Force census certificate and the Kad Burung Burung (issued in the 1980s by the state government), he said Thursday (June 2) after a day-long town hall session with a cross section of community leaders.

He said the move to obtain biometric data as well as issue a card would ensure the human rights of the inland foreigners were respected and ensure the sovereignty of Sabah was not threatened by their presence.

He said the inland foreigners would be able to send their children to schools or hospitals and pay for the services set for foreigners as well as open bank accounts and not be exploited by employers.

"This will ensure that the sovereignty of Sabah is not compromised. It will help Sabahans overcome their fear of being outnumbered by foreigners. If we don't solve this problem now, the problem will become impossible to resolve.

"The Federal Government has given us the opportunity to resolve this problem on our own terms. We need the Federal, state government and opposition to be together, so that we can resolve this issue," he said.

Kitingan said that he would be informing the state Cabinet about the feedback from the town hall session and simultaneously meet with Home Minister Datuk Hamzah Zainuddin on starting efforts to obtain biometric digital data of the inland foreigners.

He said the secretariat would be under the state government's Internal Affairs and Research Office under the Chief Minister's Department with the help of enforcement agencies under the Home Ministry.

He said the process would take about three to six months.

Kitingan said that some 140 representatives from political parties from government and opposition including Pakatan Harapan leaders, non-governmental organisations and native chiefs were among those attending the meeting.

He said that an online poll saw 89% voting in support for the issuance of a foreigner card while 99% supported the collection of biometric digital data on the inland foreigners in Sabah.

The key concerns raised by participants during discussions were whether the foreigners would be able to obtain citizenship as seen in cases previously.

"The task force will be under the state, we don't want anyone trying to hijack it as happened in the past," he said, while referring to alleged foreigner data used for issuing citizenships to foreigners.

"There were a lot of strong voices of concerns about possible abuse of issuing the foreigner cards that could end up with them getting citizenship," he said.

He said the data would be under the state secretariat and shared with the enforcement agencies.

Sabah had initially rejected the Home Ministry's offer for the foreigner cards to be issued to inland foreigners amid strong objections. 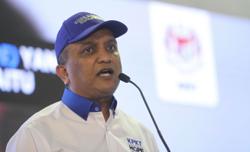