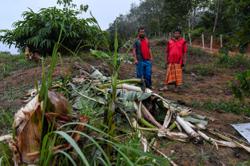 KOTA BARU: The Kelantan branch of the Wildlife and National Parks Department (Perhilitan) has mounted an operation to control and drive off a herd of 20 wild elephants detected in Kampung Tok Uban and Kampung Catan in Lata Rek, Kuala Krai, near here.

He said the elephant herd that was causing the disturbance is believed to be from the Sungai Rek Forest Reserve.

"The herd has split into two main groups, namely 14 elephants in the Kampung Tok Uban area, whereas six elephants are in Kampung Catan.

"These elephants are most likely to enter the village areas by going along the electric fences that had been erected by the plantations," he said in a statement Monday (May 30).

“There are several factors why these elephants loiter around village areas. This includes the reduction of their natural habitat and the ease of locating food in village areas as residents have cultivated sugar cane, cucumbers and bananas.

"In addition, there are also orchards that are overgrown, so combined with the three factors, these pose a higher risk of attracting these wild elephants," Hafid said.

“Perhilitan has advised residents to light bonfires (to ward off these elephants) surrounding their respective dwellings and along the elephant path to their villages and plantations.

"Besides this, villagers are also asked to always clean their surrounding areas, plantations and farms to avoid attracting wildlife,” he added. - Bernama