KOTA KINABALU: A 59-year-old housewife was murdered after her daughter's boyfriend allegedly slit her throat at an apartment in Sandakan.

It is learnt that the victim and her 25-year-old daughter had gone to meet the 31-year-old suspect over his relationship with her daughter at an apartment in Taman Sentosa in Sandakan on Saturday afternoon (May 28).

Sources said that an argument had erupted during the meeting and the man attacked the woman with a knife, killing her on the spot.

Her daughter's hand was injured during the altercation.

After the incident, the suspect surrendered at the Sandakan police station and was immediately arrested.

Police are still looking into the motive of the murder, and the victim's body was sent to the Duchess of Kent Hospital for a post-mortem and a remand order has been obtained against the suspect. 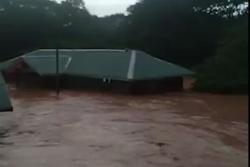