KUALA LUMPUR: Some 263.4kg of ecstasy pills worth RM26.4mil were seized in a series of raids in Kuala Lumpur on Thursday (May 26) that saw five people arrested.

He added that a local man and four women from China were detained in the raids conducted between 4.30pm and 11.30pm on Thursday.

"Several units were used by the syndicate to process the drugs and store them. We seized 263.4kg of ecstasy as well as equipment used to process the pills," he told a press conference at Bukit Aman on Sunday (May 29).

The drugs seized could have been supplied to 880,967 addicts, he said.

Comm Ayob added that the syndicate is believed to have been in operation since the end of last year.

"We believe they used a luxury condominium to process the drugs in a bid to avoid detection.They catered to the local market, especially entertainment outlets in the city," he said.

Comm Ayob said the initial investigation showed that the mastermind is the local man, adding that one of the Chinese nationals is his girlfriend.

"They have been remanded for seven days and we are investigating to uncover the extent of the syndicate," he said.

Comm Ayob said assets belonging to the suspects, including two vehicles, jewellery and cash were seized as well.

"We urge those with information on drug related offences to contact the NCID hotline at 012-208 7222," added Comm Ayob. 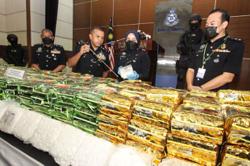