KUANTAN: Malaysia's gold haul at the recent sea games is open to criticisms, but do be constructive, says Datuk Seri Ti Lian Ker.

The Youth and Sports Ministry welcomes criticisms of the country's gold medal haul in the Vietnam SEA Games, but these criticisms should be constructive, said Ti who is its deputy minister.

Ti said the target of 36 gold medals was set after consultation with all respective stakeholders and sports associations.

"It's not plucked out of the sky or at the whims and fancy of the Minister or Ministry. This consultation was also based on the games that were set by the host nation, which had the advantage as they could choose the games.

"Every SEA Games has a different ecosystem. We welcome criticisms but it would have been much better when the target was set.

"Any criticism should be constructive. The criticism on the target should be timely when it was decided with consultation and not after the event with unfairly skewed criticisms," he said after launching the Pahang-level Rakan Wira Mahir programme here on Saturday (May 28).

Ti added that the national athletes actually exceeded the target by coming home with 39 gold medals, which deserved encouragement.

"Sixty percent of them were first-timers competing in an international event, while 40% are below 21 years old. Critics should take note of all these facts and be fair about it," he said.

DAP's Steven Sim had reportedly accused Youth and Sports Minister Datuk Seri Ahmad Faizal Azumu of attempting to pass the buck to the athletes for the country's performance in the 2022 SEA Games.

The Bukit Mertajam MP, who served as the deputy youth and sports minister in the Pakatan Harapan government, had called out the Ministry for slashing the budgets for participation in international tournaments by 80% in the 2022 Budget compared to the 2018 Budget.

To this, Ti said this had been overcome as Ahmad Faizal had worked hard to regain what was not allocated in the Budget.

He said furthermore, the Budget was set by the Finance Ministry, so it was unfair to blame Ahmad Faizal.

"Criticisms should not be personal and critics should not replay issues that have already been settled to start a barrage of new attacks, as if it's still there or to attack without basis based on distorted facts, unreflective of the true situation of the matter," he said.

On Rakan Wira Mahir, Ti said it was an upskilling programme to give local youths a headstart in skill-related work.

"We cannot be dependent on foreign workers for jobs that require skill. We do not want there to be a day where the blue-collar sector has to rely on foreign labour.

"We also have to let people understand that being a skilled worker is not being stuck in a stagnant field of work. They may start with lower pay but the ceiling is high. Ultimately, they can become entrepreneurs," he said. 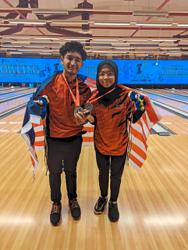