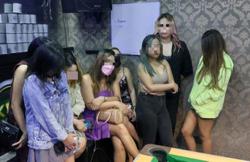 KUALA LUMPUR: Three foreign women believed to have been working as guest relation officers (GRO) were among four individuals detained in a raid at an entertainment outlet at Jalan Kuchai Lama.

Kuala Lumpur CID chief Senior Asst Comm Habibi Majinji said the foreign women were detained along with a local man, who is the outlet's manager during the raid at about 12.40am on Saturday (May 28).

"We detained three Vietnamese and a Thai woman. We believe they were working as GROs," he said in a statement on Saturday.

Checks were also conducted on 15 patrons, as well as nine other workers at the outlet, he added.

"We seized audio equipment and business receipts from the premises," he said.

Initial investigations revealed that the outlet was operating without a valid licence, SAC Habibi said.

"We will step up such operations in the city.

"We also urge those with information on any vice or criminal activity to contact the nearest police station," he said.