Heartbreaking scene: A policeman with several villagers looking at the monsoon drain where the girls drowned in Kepayan, Kota Kinabalu.

KOTA KINABALU: Two young girls jumped into a large monsoon drain in a desperate attempt to rescue a child who had fallen in – but it turned into a triple tragedy when all three drowned at a village near the Kota Kinabalu International Airport here.

The three, aged five, 10 and 12, were believed to have been playing on the edge of the drain at Kampung Bunga Raya in Kepayan when the five-year-old slipped and fell in at about 2.30pm on Monday.

The other two girls quickly jumped in to rescue her but they did not know how to swim either.

The drain, which is 5m wide and was under 2m of water, is located in a secluded area about 200m from the village.

ACP Mohd Zaidi said a teenage boy who saw the incident rushed to pull out the girls.

Passers-by who helped the boy then rushed the girls to Queen Elizabeth Hospital II in an ambulance and private car.

However, all were declared dead on arrival at the hospital.

He said the girls were related and lived close to each other at a squatter house in the village.

“Further investigations are being carried out,” he said, adding that the matter had been classified as sudden death. 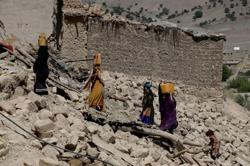