Zuraida is the Plantation Industries and Commodities Minister.

The Bersatu youth chief said that Zuraida's exit was mutually agreed and the move anticipated.

He added that a show-cause letter had previously been sent to her, alleging her involvement in PBM.

"With her resignation, it is clear that she was involved in the newly formed party.

"We would like to thank her for all her services as a Bersatu minister. However, as for now, the replacement must come from Bersatu," he said when contacted on Thursday (May 26).

Earlier, the Ampang MP announced that she had left Bersatu and would join PBM.

"I will meet Prime Minister Datuk Seri Ismail Sabri Yaakob to discuss my resignation as minister," she said in a press statement.

Zuraida is in Turkey to speak at the opening ceremony of the Seventh Pioneers Conference for the Global Women's Coalition for Al-Quds and Palestine.

Zuraida, who was a Bersatu supreme council member, is expected to return to Malaysia on June 2 after participating in a Malaysian Timber Council (MTC) business mission.

Zuraida has isolated herself from Bersatu, says party disciplinary board chief 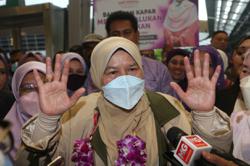