PADANG BESAR: Undocumented immigrants were found to be using lights from factory buildings around Chuping and Padang Besar as a guide for them to enter the country illegally.

In revealing the matter, 18th Battalion of the General Operations Force commanding officer Supt Ramli Wan Salin said the illegal immigrants would usually move to the Padang Besar-Thailand border in the wee hours of the morning.

"Once they reach Malaysia, they (illegal immigrants) will be assisted by ‘tekong darat’ (ground coordinator) who mostly consist of locals to be taken to their respective destinations,” he told Bernama recently.

Ramli said based on the aerial survey conducted by the GOF together with the Royal Malaysia Police (PDRM) Air Operations Force (PGU), the route used by the illegal immigrants was an open space area.

He said most of the illegal immigrants detained were Myanmar nationals, aged 17 to 40, and they usually moved in a group of no more than 30 people.

According to Ramli, the ground coordinator was also found imposing a RM3,000 fee on each illegal immigrant for them to enter Malaysia from Thailand.

"They (illegal immigrants) are always looking for ways to encroach into the country’s borders and GOF will not let that happen,” he said.

Meanwhile, Ramli said it was a bit challenging for GOF to take ground coordinators to court due to difficulties in gathering enough evidence.

"The ground coordinators can be charged under the Anti-Trafficking In Persons and Anti-Smuggling of Migrants (Atipsom) Act 2007 (if there is sufficient evidence to prove that they have committed such offence,” he said. - Bernama 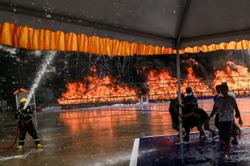