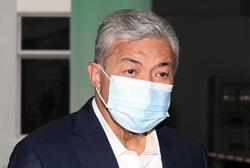 KUALA LUMPUR: Former deputy prime minister Datuk Seri Dr Ahmad Zahid Hamidi told the High Court here Wednesday (May 25) that the monthly balances in his personal bank account were sufficient to settle his credit card bills without requiring him to use funds from Yayasan Akalbudi (YAB).

Ahmad Zahid, 69, said it was his former executive secretary Major Mazlina Mazlan @ Ramly who negligently used cheques from the foundation to pay for his personal credit card expenditures.

"The balance in my personal bank account every month was more than sufficient to pay for my personal credit cards,” he said.

He said this in reply to a question from his lawyer Hamidi Mohd Noh when making his defence on 47 charges - 12 on criminal breach of trust, eight on corruption and 27 on money laundering - involving millions of ringgit belonging to YAB.

When asked by Hamidi why Mazlina had used YAB cheques to settle the credit card bills, Ahmad Zahid said Mazlina was careless and had made a mistake by paying with YAB cheques.

"Mazlina in her testimony in court earlier also admitted to being negligent in that she did not know, was unsure and could not remember regarding the management of credit card bills,” he added.

At an earlier hearing, Ahmad Zahid told the court that Mazlina, who was entrusted with managing his personal and YAB accounts, had committed various acts of negligence, including failing to understand and read his credit card statements, which caused insufficient and excessive payments to be made.

For the 12 charges of criminal breach of trust, Ahmad Zahid is alleged to have used YAB funds to make six payments for his credit cards, and insurance policies and licences for his private vehicles, transfer money to a legal firm and make contributions to the Royal Malaysia Police Football Association.

He was charged under Section 409 of the Penal Code, which provides for a jail term of between two and 20 years, whipping and fine, upon conviction.