Covid-19: Sarawak aims to get 80% of children vaxxed by end of June

The Sarawak Deputy Premier said only 66.8% or 190,989 children had received two doses of the vaccine so far since the immunisation programme for the age group commenced on Feb 3.

For adults above 18 and adolescents aged 12 to 17, he said over 90% of the population in both groups had been vaccinated with two doses as of May 20.

Overall, 83% of the state's total population or 2,343,667 Sarawakians have received two doses.

"Sarawak has achieved a high immunisation rate despite its vast area and difficult environment, especially with 40% of the population living in rural villages and longhouses," he told the state legislative assembly during his winding-up speech on Wednesday (May 25).

"The programme to administer the second booster dose recently commenced.

On rabies, Dr Sim said seven human cases have been reported this year for a total of 48 cases since the outbreak began in July 2017.

He said there were five survivors out of the 48, including three this year.

"Sarawak can be declared rabies-free once we remain free of animal and human rabies for a period of at least two years," he said.

He added that measures to curb the disease-included talks, distributing brochures to the community and displaying posters on the danger of rabies. 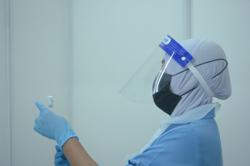