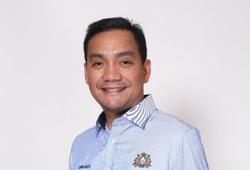 The Umno vice president said that Onn Hafiz has received the full support of its Johor party members and there was never resistance against him as the head of the state government.

"There has never been any opposition from Johor Umno towards Onn Hafiz. Such an issue had never occurred.

"Pasir Gudang Umno has also given its full support to Onn Hafiz and what is important is for the current state government to be able to carry out their responsibility effectively," said the Pasir Gudang Umno division chief.

He also hoped that the state government under Onn Hafiz's leadership would continue to be committed to improving the lives of Johoreans.

Khaled said this after his Hari Raya Aidilfitri open house at Puncak Kasih, Bukit Layang-layang here on Monday (May 23) night.

On another matter, Khaled said that there is a strong momentum for the general election to take place at the moment.

"The Prime Minister has the right to decide when the general election will be but as party leaders, we also have our own consideration on the most suitable timing for it.

"At the moment, the momentum is strong but sometimes, momentum alone is not enough. There are other considerations as well," he said.

He added that the performance of the state and Federal Government would determine whether the momentum would last until the general election.

Asked if he would contest in the general election, Khaled said that he would leave it to the party to decide.