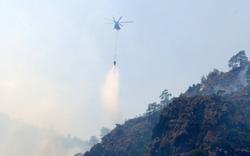 NIBONG TEBAL: The Fire and Rescue Department (JBPM) took four hours to extinguish a fire at a landfill in Pulau Burung here on Monday (May 23) night.

Penang JBPM operations officer Abdul Syukur @ Mohd Ilhami Musa said his team received an emergency call at 10.34pm yesterday, after which a fire brigade from the Nibong Tebal fire and rescue station (BBP) was deployed to the location.

"When we arrived at the scene, we found the fire involved the landfill, with the blaze covering 40,000 square feet.

"We used three units of excavators and bulldozers in the operation to help quell the fire from spreading using even the 'water tank' machine," he said when contacted here on Tuesday (May 24).

He said firefighters were able to control the fire at 12.01am, but it took them four hours to ensure the fire was completely extinguished at the bottom layer and work was finally over at 3am today.

He said a total of 50 officers and police personnel from the Volunteer Fire Brigade (PBS) were involved in the firefighting operation.

"The cause of the fire is still being investigated, however, we do not discount the possibility that it could have resulted due to the extremely hot weather we have been experiencing," he said.

This is the second fire at the landfill. On Jan 12, a fire broke out involving 11.3 hectares (ha) out of a total of 16.2 ha, and it took nearly a month before the fire was doused.

The fire also resulted in the area being declared as a Level 1 disaster area based on the National Security Council (MKN).

Following the incident, 86 families with about 400 residents living nearby had to be evacuated to ensure their safety, while 10 schools were also closed for three days. - Bernama