KUALA LUMPUR: Police have opened an investigation over a tweet by Lim Kit Siang (pic) that allegedly contained a statement that could threaten public order.

Bukit Aman CID director Comm Datuk Seri Abd Jalil Hassan said police had detected a tweet which read "Will the houses of the prime minister and ministers of malaysia be set on fire by angry protestors as happened in sri lanka last week?". 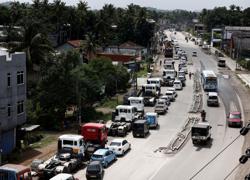