KOTA KINABALU: Former Umno assemblyman for Bugaya, Datuk Ramlee Marahaban, will not reject calls to re-contest in the upcoming election if needed.

He said although he had no intention of contesting again, he would not decline if the people want him back, and he is given the trust and duty to get active in politics once more.

"I am taking things slow at the moment, choosing to sit back and relax and to give way to new leaders and the current leadership to serve the people for now because I do not want to be thrown with negative perceptions if I do more," Ramlee said in a statement.

The former Sabah assistant minister of Finance said he would also continue to work with the election machinery no matter what as his heart was still with Umno.

Asked about the vacant seat in Bugaya following the death of its assemblywoman Manis Muka Mohd Darah in November 2020, he said it was better that a by-election was held as soon as possible.

He said the seat had been vacant for almost two years and the people had been without a state representative since.

Ramlee said if larger states like Johor, Sarawak and Melaka could hold the state elections, there was no reason why a small seat like Bugaya could not have its by-election.

He urged the Election Commission to look into this matter and to call for a by-election soon for the benefit of the people.

"I hope to see new faces in the election line-ups, and to have more from the younger generation be part of the leadership," he said.

Ramlee said veteran leaders like himself should make way for the younger people.

He became a first term assemblyman in the 2008 elections and became a state assistant minister in the second term (GE13).

He had contested for the Semporna MP seat in 2018 but lost it to Parti Warisan’s Datuk Seri Shafie Apdal. 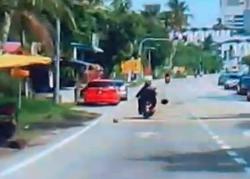