The Defence Minister said discussions on allocations for the welfare initiatives are underway and he guaranteed that it would be announced once the details were ironed out.

“On issues concerning the welfare of veterans, we will continue our efforts. We are waiting to announce it, as there are several matters involving other ministries and various departments under the Defence Ministry.

“It depends on allocations and I guarantee, that whichever (initiative) is done with discussions, we will make an announcement at the soonest time possible,” Hishammuddin said at a press conference at the Dataran Pahlawan at Putrajaya Saturday (May 21).

Hishammuddin was present for a Malaysian Armed Forces veterans event to commemorate their 100th anniversary.

He said he did not want to reveal details of the initiatives, as he didn’t want the announcement to overshadow the event commemorating the 100-year anniversary.

“Celebrating 100 years only comes once,” the Sembrong MP added.

Meanwhile, Hishammuddin said he was touched that the Malaysian Armed Forces veterans had braved the scorching heat to assemble for the event.

“A huge part of our veterans are on the right track and they believe that the Defence Ministry and the armed forces will continue upholding their welfare,” said Hishammuddin.

Earlier in his speech, Hishammuddin said he was aware of the “additional wishes” by the veterans to improve their welfare and that this was being addressed by the Defence Ministry.

“But, I request for your kind understanding, that such wishes may need careful government spending, as the country is still trying to recover from the effects of the Covid-19 pandemic that lasted for more than two years,” he added.

However, Hishammuddin said veterans can still voice out their “desires”, as his priority of leading the Defence Ministry was always ensuring the welfare of the Malaysian armed forces veteran.

“Believe me, my stance has never changed,” added Hishammuddin. 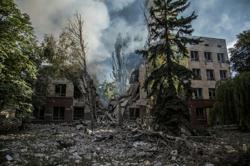