KUALA LUMPUR: Malaysia is studying the viability of imposing a tobacco product display ban as part of the country’s “generational endgame” strategy to end the smoking habit.

If implemented, shopkeepers might not be able to display tobacco products in their premises – a move that has been implemented in many countries such as Australia, Singapore and Britain.

Health Minister Khairy Jamaluddin, however, said that such a move would require thorough studies and engagement sessions with stakeholders first.

“Among the suggestions is that tobacco products for sale cannot be displayed. There are also proposals for plain packaging on tobacco products, similar to what other countries are doing.

“These proposals are being studied by the Health Ministry,” Khairy told reporters after launching a World Asthma Day event here.

Malaysia’s “generational endgame” move is a plan to ban the sale of cigarettes and tobacco products, including vapes, to people born after Jan 1, 2005.

The Tobacco and Smoking Control Bill is currently being finalised and it could be tabled in the Dewan Rakyat this July.

Khairy, however, said the provisions for the tobacco product display plan, if approved, would not be inserted in the Bill.

“The provisions will be part of the rules and regulations (of the smoking ban) that will only be drawn up after the Bill is tabled,” he said.

Engagement sessions will need to be organised with health groups as well as business owners, said Khairy.

“If we are to impose a product display ban, premises owners might need to make modifications to their shops.

“This is why we need to have more engagement sessions on this, as the matter involves many stakeholders.

“We will also look at how effective the display ban is in other countries. Once we have completed our study on this, we will make a decision.

“If we agree to implement the product display ban, we can start transitioning towards the move,” said Khairy.

On another matter, Khairy said the compliance level of the Malaysian public towards Covid-19 preventive measures will help the country successfully transition to endemicity.

“We can see how well the Malaysian public have behaved during the transition to the endemic phase. Even though it is not compulsory anymore, people still put on masks outdoors.

“Malaysians have the capability to make this transition to endemicity a success without the need to enforce laws or issue compounds,” said Khairy.

Covid-19 infections saw a slight increase in the past week, but it has improved in the last two days, with the national infectivity rate currently down to an RT level of 0.91. 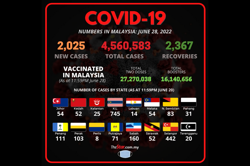 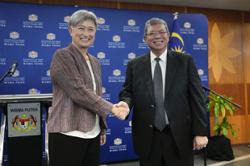