He said such operations involved extinguishing fires in the forest and high-rise structures such as buildings.

"Several researches have been conducted especially involving putting out fires using unmanned aerial vehicles (UAV) and there are indications of its effectiveness but we need drones which can carry heavier load such as carrying about 100 litres of water which weighs about 100kg.

"We are studying the use of drone in certain areas using chemicals as it is more effective in dousing flames,” he said as a special guest of Awani Pagi here Friday (May 20).

He said so far JBPM has four drones which can carrying moderate load apart from being used for monitoring in search and rescue operation.

Mohammad Hamdan said the deployment of drones also helped to reduce risk to the department’s personnel as well as saving time and energy in each of the operation carried out.

On the preparation of JBPM in facing the southwest monsoon transition which results in hot and dry weather, he said 12,500 firemen nationwide including its assets are ready for the situation.

"We believe from this month until September, we will face droughts and the dry weather which could lead to water crisis as well as fires and contribute to haze in the environment.

"Monitoring will be conducted by firemen especially in hotspots such as forest and peat soil areas in Selangor, Pahang, Sabah and Sarawak,” he said. - Bernama 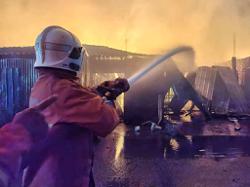