PUTRAJAYA: The Cabinet Special Committee on Anti-Corruption has agreed for the Political Funding Bill to be put in place to prevent corruption and power abuse among politicians, says Datuk Seri Ismail Sabri Yaakob.

The Prime Minister said the matter would be brought to the attention of the Cabinet for further discussion before engagement is carried out with political parties.

"This law is important because we want to avoid corruption and power abuse among politicians, which is detrimental to the country's and government's image," he said in a statement on Thursday (May 19).

The Prime Minister, who chaired the meeting, said the scope for the Political Funding Bill would be presented to the Cabinet soon.

In 2019, then-minister in the prime minister's department Datuk Liew Vui Keong said the government would table the Political Funding Bill, which would focus on the regulatory aspect of political contributions.

Recently, the anti-corruption advisory board made several suggestions to the special committee on corruption, including enhancing laws to regulate political funding.

The Prime Minister also said the meeting agreed for the National Financial Crime Centre (NFCC) to be the central agency to manage properties and possessions that were seized and forfeited.

He said it was important for NFCC to undertake the responsibility so that war against financial crime and leakage of government revenue could be prevented.

The NFCC was set up in 2018 to fight money-laundering activities.

"Out of 53 clauses involving management of properties that were seized or forfeited, 26 need to be amended so that the agency can carry out its latest task," he said.

The separation of offices of the attorney general and public prosecutor was also discussed, and the meeting agreed that it needed further study.

Ismail Sabri said a national plan on good governance to be known as MyGovernance would be introduced to further strengthen the delivery system in the public sector based on principles of transparency, accountability, efficiency and effectiveness. 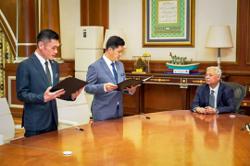