Melonia Lineri Loganathan won plenty of admirers after she showed them how she handled cyberbullies who made body-shaming comments about her.

KOTA KINABALU: Winning the crown is every beauty pageant contestant’s dream, but losing is not the worst outcome they can face these days.

Sometimes, they have to endure online insults but Melonia Lineri Loganathan showed excellent class and grace when confronted by body-shaming comments by Malaysians over social media recently.

Melonia, who is of mixed Kadazan Dusun and Indian parentage, was competing as a finalist in the Unduk Ngadau pageant at the Tambunan district level which was streamed live on Facebook when some hurled unsavoury remarks about her appearance.

Someone took screenshots of the brutal comments, of which some bordered on racial lines, and they went viral almost instantly, prompting a backlash from her fans who condemned the tactless criticisms.

While she did not come out tops at the district-level event, which would have secured her a place at the state finals at the end of this month, Melonia, however, won plenty of admirers after how she handled the cyberbullies.

Speaking on her social media account, the 18-year-old said she was touched by the words of encouragement by her supporters who had come to her defence.

“The support you have given is immaculate to the point I don’t even bother about the negative comments already. I’m okay, don’t worry.

“The relevant parties have also apologised personally to me (and) I have forgiven them. It’s okay, everyone makes mistakes, right?” she said. 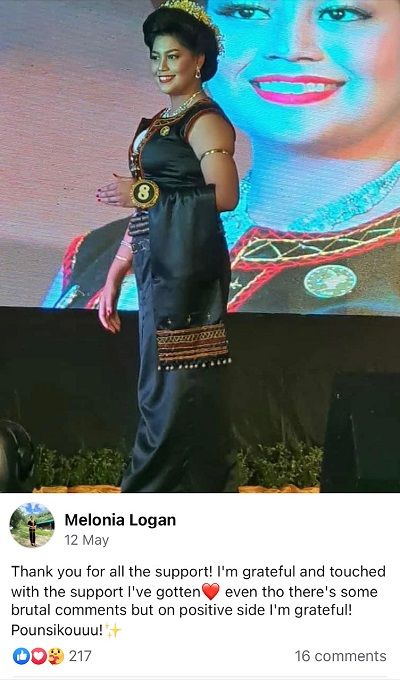 Melonia Lineri Loganathan thanking her supporters for their words of encouragement on social media.

Melonia went on to say that everyone should take what transpired as a lesson and also underlined the importance of putting a halt to body-shaming.

“Last but not least, to all the sumandaks (ladies) out there, be confident. I am fully behind you in joining the Unduk Ngadau pageant. If we don’t uphold the Kadazan Dusun Murut Rungus (KDMR) traditions, then who will?

“When I called Melonia, she was very calm about the whole thing and thanked those who supported her. I am indeed very sad and flabbergasted to read such comments,” she said on Tuesday (May 17).

“Malaysians can be unashamedly cruel in giving their comments to our beautiful and lovely young Unduk Ngadau contestants who have the courage to participate in the cultural Kaamatan pageant.

“In this era of technology, people should watch what they post about others because you may be in a worse situation yourself. And why hide (your names) with pseudonyms?”

Kitingan said no one has the right to judge anyone else just by looking at their bodies and appearance.

She said she has told all the contestants that they were already winners in their own right and beautiful in their own ways, adding they should not accept any nonsense, especially from those that degrade them as young women.

“The contestants know very well that being an Unduk Ngadau is about the sacrifice of a young beautiful woman who empowers herself to be sacrificed for the sake of her people.

“So, it is not about her height or body shape that matters but her obedience to her parents and the willingness to be sacrificed so that her people may live.”

Kitingan said she had also given motivational talks to Unduk Ngadau finalists in Keningau and Tambunan and also gave them an essay to write entitled “Who Am I?” and why they wanted to join the pageant.

“Most of them who are first timers really wanted to have the confidence to speak in their mother tongues in public and also to know their culture deeper.

“It’s indeed a shame and heartless for these women to be targeted with such disparaging remarks. People out there do not know what they go through in life. What if they were your own daughters?” Kitingan said.

Held yearly during the Kaamatan month throughout May, the UNK pageant is to commemorate the legend of the kind and beautiful Huminodun.

The daughter of Kadazan Dusun gods Kinoingan and Sumundu, Huminodun sacrificed her life to save the people from a famine.