This comes after questions were raised over the relevancy of such committees in light of the nation's track recovery.

"Yes they are still relevant as it will relate to recovery. That responsibility should not be solely on the Federal Government but also on the states.

"This is because local authorities have the duty and responsibility of resolving issues that are very localised," he said after chairing the National Recovery Council here on Tuesday (May 17).

He said the Cabinet has approved the proposal in principle and only requires the nod from Prime Minister Datuk Seri Ismail Sabri Yaakob for its implementation.

"The council and Cabinet has approved the proposal and all the Prime Minister needs to do is to sign the letter," he added.

The National Recovery Plan was launched by Muhyiddin when he was then prime minister.

The government, under Ismail Sabri Yakob, announced that the nation will move into the endemic phase beginning April 1 this year.

This saw the lifting of restrictions and opening of the economic sectors and international borders.

Meanwhile, Muhyiddin also said the council discussed the war in Ukraine and the prolonged lockdown in China due to Covid-19, which is affecting supply chain.

He added that the council will hold its inaugural conference at the year end to further help map out the nation's recovery. 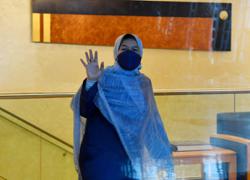