Its state chairman Dr Roslan Ahmad said after the discussion with the state Pakatan Harapan secretariat the party had agreed with the initial seat arrangement.

"We will contest in the seat that we contested in the last general election which is Permatang Pasir, Sungai Dua and Penaga and also one parliamentary seat in Kepala Batas," he said during a press conference after the launch Tasek Gelugor GE15 election machinery on Sunday (May 15).

Roslan said the party would also contest the two state seats and a parliamentary seat held by Parti Pribumi Bersatu Malaysia from the last general election.

Bersatu which was one of the members in Pakatan during GE 14 contested in Permatang Berangan and Penaga state seats and Tasek Gelugor parliamentary constituency.

He said it was the dream of every political party to contest more seats in the election but for him what is the most important thing is to be able to achieve victory.

"If we want to place more candidates in the GE 15, we must also ensure that we are capable of winning those seats," he said.

He said currently the seat negotiation between Pakatan coalition members at the federal level is just at the initial stage of discussion and nothing has been finalised yet.

When asked about the cooperation between the Malaysian United Democratic Alliance (Muda) and other opposition parties, Mohamad, popularly known as Mat Sabu said negotiations would continue until the final days leading to the GE15.

In GE14, Amanah won 11 parliamentary seats out of 34 the party contested.

The Kota Raja MP said that based on the last two state elections in Melaka and Johor, the percentage of people coming out to vote was disappointing.

"We must restore the people's trust that the parliamentary democracy system is still working in this country after the Sheraton Move," he said. 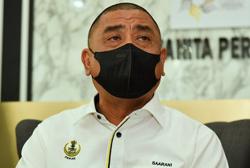