Chong, who met with the CID’s Anti-Trafficking in Persons and Anti-Smuggling of Migrants (Atipsom) unit in Bukit Aman on Friday, said that both parties are working together to create awareness on the matter.

“CID deputy director (Intelligence/Operation) Deputy Comm Datuk Hussein Omar Khan confirmed that he had received numerous reports from the victims’ families and from his side as well. Investigations are ongoing on those reports.

“He advised Malaysians to be wary of Facebook advertisements as criminals would entice potential victims with the promise of large amounts of money,” he said.

Chong said that the police has advised victims not to pay any ransom as there had been cases of victims still being held despite delivery of the money.

In April, 16 Malaysians aged 19 to 43 were rescued by the Cambodian National Police with the cooperation of Malaysian police, Interpol, Aseanapol and the Foreign Ministry, after being held by a human trafficking syndicate in Cambodia.

Investigations showed that the victims were promised jobs as customer service representatives with high salaries.

However, the victims only realised they had been duped after they were forced to work as scammers. 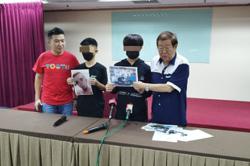