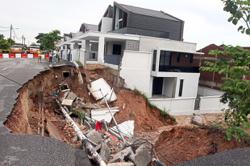 IPOH: A family of five who just moved into their new home in Taman Sri Perkasa here two days ago were horrified when the perimeter wall of their home collapsed during a landslide.

Freelance insurance agent Dina Liz Ismail, 37, said part of the slope next to their house on Laluan Lapangan 3 gave way during a thunderstorm just before dawn on Sunday (May 15).

"There was a blackout at about 5am, and we could see muddy water flowing on the road in front of our house and down the slope.

"At about 6am, the perimeter wall started to crack and then collapsed along with part of the slope," she said.

"It was a scary moment for us as this was totally unexpected," she added.

Dina Liz said the structure of the house had been checked by the developer and was found to be still stable.

"The developer said it would repair the damage and put us up at a nearby homestay," she said, adding that the repairs could take about two weeks.

A Fire and Rescue Department spokesman said they received a call about the incident at about 7am.

"Shortly after we arrived, we inspected the location to ensure that no one was hurt.

"We advised the affected house owner and two other residents living near the landslide to vacate their homes for now," he said.

Residents' association chairman Datuk Zul Zukree Zakaria said he believed that the landslide was caused by a nearby development project.

"Since the project started about two years ago, there have been numerous flash floods here.

"This time, part of the slope collapsed," he said.

"We hope the Ipoh City Council will (view) this matter seriously and take action before more incidents happen," he added.

Former lecturer Noah Wong, who has been living in the area for almost a decade, said the roads outside their houses often flooded when it rains heavily.

"It has become worse over the past year and it's just a matter of time before the water enters our houses," the 57-year-old said.

Meanwhile, Gopeng MCA vice chairman Cally Ting said she would try to find a solution to the constant flash floods there.

"We will meet with all the relevant parties, including the developer of the project and the mayor.

"Some 106 residents have collected signatures to be passed to the mayor asking him to look into the issues here.

"We all want to find out the main cause of the flash floods and resolve it," she said.

Former Ipoh city councillor Kok Pak Foo said there had been two landslides along the road in the area.

"I believe the drainage system can no longer accommodate the amount of water that flows through, especially when it rains heavily.

"A lot of new houses are also being built nearby," said Kok, who is also a Gopeng MCA vice-chairman.

"We urge the city council to find the root cause of the flooding.

"Areas that have never been flooded are now getting inundated," he said.

"The state government needs to have a plan to handle climate change, as we are now seeing its impact," he added.

Tasamuh can help unite Muslims and the world, in line with Malaysian Family concept - PM
Najib to respond over bid to adduce more evidence in SRC case
Return to Quran and sunnah to resolve misunderstanding - PM
Couple killed in head-on collision in Negri
Ahmad Zahid denies blaming ex-staff member to ‘save his own neck’
Driver killed, six pupils injured in accident involving two MPVs
DAP's principles are more questionable, says Warisan
Ahmad Zahid wants NRC to be abolished
Bella was thin, in state of fear when I met her at HKL - witness
Kiandee: Govt striving to reduce impact of rising cost of living