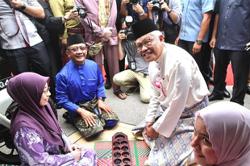 KUALA LUMPUR: Priority should be given to ensuring a stable government and the fulfilment of all of its agenda for the benefit of the rakyat instead of being fixated on party hopping, says Datuk Seri Hamzah Zainudin.

The Parti Pribumi Bersatu Malaysia secretary-general said the issue of leaving a party was normal as it has been happening for some time now.

“Leaving a party happens not just at the ground level but among the party leadership as well.

“Many Umno leaders, including Tun Dr Mahathir Mohamad, have done so.

“It shows the main agenda is for the benefit of the rakyat, not the individual,” he told reporters after attending Bukit Aman’s Hari Raya Open House held at the Police Training Centre (Pulapol) here yesterday.

Hamzah was asked to comment on Umno supreme council member Datuk Seri Md Alwi Che Ahmad’s view that those who defected from Umno should be welcomed back.

“For me, what happened in the last three years after the general election has happened.

“Some occurred based on planning while others occurred due to a specific strategy, but all of it was for the benefit of the rakyat,” said Hamzah, who added that anything that has to be done must be done with a pure motive.

“It will prevent issues cropping up later on whether the action was for the benefit of the individual or for the greater good,” he said.