KOTA KINABALU: The Education Ministry is urging pupils of a village in interior Nabawan district to use a longer land route to school for their safety.

Deputy Education Minister II Datuk Mohamad Alamin said that pupils and villagers should use the longer route pending the replacement of boats and the hanging bridge at Kg Nangkawangan as the existing suspension bridge was washed away in floods.

He said though the issue of the hanging bridge did not involve the Education Department as it was a public infrastructure matter, they were concerned for the safety of the children using rafts or zip-lines.

"We will monitor the implementation of the hanging bridge as the safety of pupils is always a concern for the ministry," he said in a statement on Saturday (April 30).

Mohamad said that the zip line was used by villagers to ferry goods, and it appears that the children were interested to ride on it, and when it was recorded on video, it became viral.

Mohamad said Pensiangan MP Arthur Kurup had received an approval from the Prime Minister to build a new suspension bridge, adding that the state government had approved to send boats for the people and pupils. 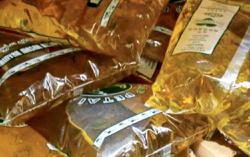