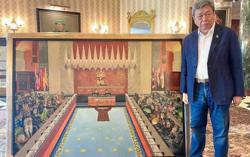 KLANG: Mesmerised by a painting that he had seen, Selangor Ruler Sultan Sharafuddin Idris Shah decided to buy a work of art to be displayed in his private study room.The painting, set in the Dewan Rakyat, depicts someone resembling its Speaker Tan Sri Azhar Azizan Harun presiding over a meeting attended by boisterous primates and frogs.

According to a post on the Selangor Royal Office Facebook page, Sultan Sharafuddin hoped to eventually auction off the painting and channel the proceeds to charity.

One user noted that the painting was similar to a 2009 painting by British street artist Banksy.

In Banksy’s painting titled Devolved Parliament, chimpanzees and orangutans were seen at the House of Commons.