ON TRACK TO A SUSTAINABLE FUTURE

Part of the elevated Bukit Kukus bypass is now open. It is the highest road in the country and was designed to reduce 30% of traffic congestion in the area, benefitting about 60,000 daily road users.

FAMOUS for its local delicacies, tourist attractions and vibrant industries, Penang is widely acclaimed as a model growing city in the northern region of the peninsula.

Like the north star – a beacon that inspires hope – Penang is demonstrating how progressive reform, social development and sustainable transformation can be pursued.

The state government under the leadership of Chief Minister Chow Kon Yeow is cautiously navigating through the unprecedented global upheaval caused by the Covid-19 virus and the uncertain post-pandemic era to ensure that Penang will not only survive but thrive.

In the past two years, the state government has provided cash handouts, interest-free loans, digitalisation initiatives and various other buffers which amounted to RM200mil to help affected groups to pull through the lockdown period. The state government has allocated RM200mil to develop Gurney Wharf seafront as an open space for recreation.

At the same time, the planned infrastructure development to build up the state’s long-term economic and climate resilience has not taken a break.

The year 2022 began with the opening of the elevated Bukit Kukus bypass, which is the highest road in the country. The project was designed to reduce 30% of the traffic congestion in the area and benefit about 60,000 daily road users.

The portion that is opened to the public in January 2022 took five years to construct and is now a landmark for road users, hikers and cyclists to savour the scenic view over the Sungai Ara landscape.

The Bukit Kukus bypass is the first among a list of ongoing infrastructure projects to be completed under Chow. Another bypass connecting Bandar Baru Air Itam to the Tun Dr Lim Chong Eu Expressway, known as Package 2, is currently being built – making 8% of progress as of January this year after being delayed by the various movement control orders.

Package 2 is one of the components of the Penang Transport Master Plan, which is the state government’s long-term scheme to build transport infrastructures at strategic locations over the next 30 years to form a seamless mobility link on both the island and the mainland – boosting public transport ridership and relieving road congestion. Penang has established 40 Women and Family Development Committees in 2019 to appoint 15 all-women committee members in all the state constituencies.

An important project under the master plan is the Penang South Islands (PSI) development, designed to assist in funding the construction of transport infrastructures and catalysing the next industrial expansion for the five decades to come. Three new islands will be created at the south of Penang island under the PSI project.

The pushback from the nullification of the approval granted to the project’s environmental impact assessment due to its alleged non-compliance to the submission procedure has not deterred the state government from pursuing the development.

“The PSI is important for Penang’s long-term growth and social uplifting of the local community,” said Chow, referring to PSI’s projection to create over 400,000 job opportunities, contribute a total of RM2.2tril to the national gross domestic product (GDP), and attract RM70bil worth of foreign direct investment (FDI), besides providing assistance and facilities to the fishermen.

On top of monetary aid, the qualified fishermen who have registered under PSI’s social impact management plan will also receive free new boat and engine, reskilling training, new career avenues, commercial opportunities, and free tuition and scholarship for their children. The social benefits provided by PSI are unprecedented for the development project of similar scope in the country. ‘We want Penang to grow according to the direction that has been set out, that is to be a familyfocused, green and smart state that inspires the nation,’ said Chow

Being an ESG-compliant development, the construction of the PSI has included elaborate off-set programmes that will not only mitigate its environmental impact but also enhance the ecosystem.

Even before the reclamation started, the project has planted 1,500 mangrove saplings since 2016 to cultivate new habitats for marine life.

While the PSI is still waiting to obtain federal agencies’ approval, the reclamation work on the Gurney Wharf that began in 2016 has been completed. The state has allocated RM200mil to develop the new seafront into an open space with hawker centres, viewing deck, parks, and other facilities for public use. In the past three years, Penang has seen the opening of new parks such as the Sia Boey Urban Archaeological Park (pic above) and Areca Park (pic below).

The Wharf is the latest project reflecting the state government’s penchant to create green recreational space. In the past three years, Penang has seen the opening of new popular parks such as the Sia Boey Urban Archaeological Park, Areca Park, Eco Robina Park, and Bougainvillea Belt Park.

“The Gurney Wharf, when fully developed, will be a new popular venue for families’ leisure and people to socialise, increasing liveability in Penang,” said Chow. The massive Mak Mandin pump house built at a cost of RM45mil is the latest completed project. In the past three years the state has seen the construction of flood mitigation projects at Parit 4 (RM19mil), Parit 5 (RM11.5mil), Taman Iping (RM13.6mil), Bayan Baru (RM20.1mil), and Taman Bunga Raya (RM1.17mil).To empower women’s participation in state development, the Penang government has established 40 Women and Family Development Committees (Jawatankuasa Pembangunan Wanita dan Keluarga or JPWK) in January 2019 to appoint 15 all-women committee members in all the state constituencies.

This is a first of its kind initiative in the country that provided an official platform at the grassroots level for 600 women to be involved in community development.

The JPWK is tasked to design and implement programmes to increase awareness and empower women and families, identify talents for leadership development, and serve as a platform for women leaders and groups to network and collaborate.

These infrastructural and social development that are taking place in Penang are based on the Penang2030 vision crafted by Chow during the first three months of his appointment. 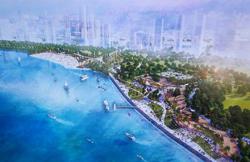