It was Dr M who wanted to meet Muhyiddin, says Bersatu Youth

PETALING JAYA: The meeting between Tan Sri Muhyiddin Yassin and Tun Dr Mahathir Mohamad was not held at the request of the Pagoh MP, says Parti Pribumi Bersatu Malaysia Youth.

“It was not Tan Sri who wanted to meet Tun. But, it was Tun who sent his emissary, Khairuddin Salleh, to meet Muhyiddin,” its chief Wan Ahmad Fayshal Wan Ahmad Kamal told The Star on Friday (April 1).

Wan Ahmad said he was unsure what transpired during the meeting between Dr Mahathir and Muhyiddin, but among the topics discussed were ways to ensure straight fights between the Opposition and Barisan Nasional during the 15th General Election.

“So I don’t know why Dr Mahathir made the statement. Maybe he was still bitter with what happened to him in Bersatu before,” added Wan Ahmad.

Dr Mahathir, in a press conference at Yayasan Albukhary on Friday (April 1) morning, said that during the meeting with Muhyiddin, he rejected cooperation with Perikatan Nasional and Muhyiddin’s bid to be prime minister again.

Muhyiddin was prime minister for 17 months from March 2020 before he resigned in August last year and was replaced by Datuk Seri Ismail Sabri Yaakob.

Dr Mahathir also described Muhyiddin as a “backstabber” during the 96-year-old’s 22-month tenure as prime minister under the former Pakatan Harapan government.

“He (Muhyiddin) stabbed me in the back so I could not be prime minister,” said Dr Mahathir, who was believed to be referring to the events of the “Sheraton Move” in February 2020.

“If he (Muhyiddin) achieved some great things for Malaysia, I’m confident that even without my help, he can win,” said Dr Mahathir.

The week-long political impasse in February 2020 that carried on till the first week of March 2020, dubbed as the “Sheraton Move”, saw the collapse of Pakatan after 11 PKR MPs and Bersatu left.

Meanwhile, Wan Ahmad said many parties are willing to cooperate with Perikatan as the party had proven to be a formidable foe against Barisan following the Johor and Melaka state elections.

“We were the second-best choice for Malay voters where Pakatan failed. Those who refused to vote for Umno voted for us instead,” added Wan Ahmad. 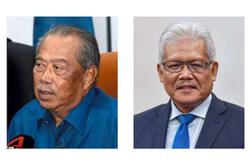