KUALA LUMPUR: The government will introduce a new more holistic and comprehensive approach to address the issue of the hardcore poor by the end of April, says Datuk Seri Mustapa Mohamed (pic).

The Minister in the Prime Minister's Department (Economy) said the government was highly committed to resolving the issue with the new approach to take into account all inputs from local leaders as well as the local community.

He said 80 localities nationwide would be selected for the early stage of implementation of the new approach.

"Before this, our approach was not coordinated, we worked in silos. This time, (the approach) is more holistic and comprehensive.

"The EPU (Economic Planning Unit) and ICU (Implementation and Coordination Unit) have started the process by conducting engagement sessions with all state governments and two days ago, we informed all menteri besars and chief ministers about this initiative," he added.

He said this during the question and answer session at the Dewan Rakyat on Thursday (March 10) in response to a supplementary question from Datuk Seri Azizah Mohd Dun (Bersatu-Beaufort) on the government's measures and strategies in addressing the issue of the hardcore poor in the country, especially in Sabah.

Earlier, to a question from Vivian Wong Shir Yee (PH-Sandakan) on Sabah lagging far behind in infrastructure development, as well as high poverty level and high cost of living, Mustapa said there were specific efforts to strengthen socio-economic development in Sabah and Sarawak as outlined in the 12th Malaysia Plan.

He said at least 50 per cent of the Federal Government's basic development allocation was distributed to the affected states, including Sabah, to accelerate development in the less developed states.

"The government has also set up the Socio-Economic Working Committee to discuss in detail and resolve issues and problems facing Sabah and Sarawak pertaining to socio-economic development," he said.- Bernama 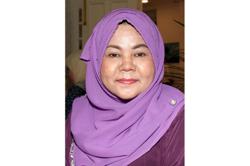