1,200km journey of ‘enlightenment’ comes to an end 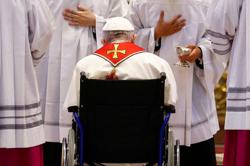 GEORGE TOWN: To relive the time when Gotama Buddha and his disciples walked thousands of kilometres up and down the Ganges River basin to share their way to the end of suffering, a group of two Buddhist monks of the Theravada tradition and 18 lay devotees went on a long journey on foot spanning more than three months.

They started on Nov 2 in Santi Forest Monastery in Ulu Tiram, Johor, and after reaching Perlis, doubled back to Penang to end their journey, a walk of about 1,200km.

Yesterday, more than 250 Buddhists here joined them when they reached Sultan Abdul Halim Mu’adzam Shah Bridge and together, they headed to Karpal Singh Drive, the final destination of their walk.

“By organising the walk, Ubom aims to revive an interest in the practice of dhutanga through the cultivation of mindfulness while walking,” he explained.

Dhutanga, in the Pali language, refers to ascetic practices of the Theravada Buddhist tradition allowed by Buddha, which are designed for followers to lead a spartan, austere life while avoiding extremes.

Tailored during Buddha’s lifetime over 2,500 years ago, especially for monks, it is believed that those who practise dhutanga will do away with the impediments of comfort and luxury, and be able to wholeheartedly focus on their meditation and path to enlightenment.

The two monks who were part of the group were Phra Ajahn Khemmacaro, a monk with 15 years’ practice, and Phra Cheng Sanjato, a monk of four years.

Ardent walker and hiker, LC Chin, 54, was among the lay devotees who finished the 1,200km walk.

“Being a staunch Buddhist, I steadfastly observed the teachings of Buddha during our walk although there were many obstacles along the way.

“It was indeed an enlightening journey of dhutanga,” said the part-time university tutor.