PUTRAJAYA: Some 4.5 million people, including those who received the Sinovac vaccine for their first two doses, will lose their “fully vaccinated” status if they do not get their booster shots before March 1.

Health Minister Khairy Jamaluddin said this number comprised one million senior citizens aged 60 and above, and 3.5 million others who received the Sinovac vaccine and want it as their booster shot, too.“The number of those vaccinated with Sinovac who have not gotten their booster shots is high – about 3.5 million.

“Since they insist on getting Sinovac although we encouraged getting Pfizer and AstraZeneca booster shots with better efficacy, we will allow them to have Sinovac for their booster.

“Any booster is better than no booster. We still have some in stock and will provide them on a first-come, first-served basis,” he told reporters yesterday.

He said these groups would have the rest of February to get their booster shots and urged them, especially the senior citizens, to do so in the wake of the Omicron variant.

“If they do not, they will lose their fully vaccinated status on March 1.

“Their digital certificate on MySejahtera will be white instead of yellow. There will also be restrictions at the country’s exit points,” he said but did not elaborate.

“We hope in a month or two, we can curb or stabilise this Omicron wave. Other countries took about the same amount of time to see a reduction in Omicron cases.

“If we all play our role by getting boosted, encouraging our children to take the vaccine, God willing, in a month or two, Selamat Hari Raya Aidilfitri,” he said in reference to concerns that there were “conspiracies” to restrict the coming festivities due to Omicron.

To a question, Khairy said experts running the numbers on the Omicron variant expected the wave to peak in the second half of March.

“According to the mathematical model, this wave will peak around the end of March.

“That tracks with other countries which expect the variant to take two months to peak. That means a booster does protect most people,” he added.

Khairy said what was important was blunting the exponential rise.

“That is why we should take measures such as working from home, getting booster shots and testing yourself before meeting people. These are some things that make common sense to avoid further increase,” he added.

He also acknowledged that increased mobility had contributed to the rising numbers.

“We are advising employers to continue with ‘work from home’ policies where it is not disruptive or to implement the rotation system.

“We want to reduce mobility for the next few weeks to blunt the surge of Omicron,” he said.

He also urged companies to take up the incentive provided by the Finance Ministry to modify ventilation systems at workplaces. 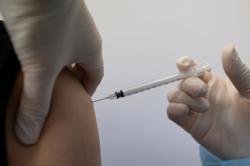