The party, through its official Twitter account, announced that every donation will help ensure that Muda will win the election.

This comes hours after party leader, Syed Saddiq Syed Abdul Rahman(pic), announced that the party would be contesting the Johor election.

“Muda's fundraising for the Johor state election 2022 has started. Every ringgit and cent spent is 100% to ensure that Muda will win the election.

“The expenses record will also be available for the public to see,” the party said in its tweet Saturday (Jan 29).

It was earlier reported that Muda is in talks with three of the major Pakatan Harapan parties about seat allocations.

Talk is rife that it will contest at least six seats in the upcoming Johor polls.

Earlier, Syed Saddiq had announced that the party would contest in the Johor state election.

The Muar MP said the state polls would be a new beginning for the party.

"Muda is set to bring changes to the state.

"So let us build a united and prosperous Johor together. Come Support Muda,” he said in a Facebook post Friday (Jan 28) night.

"The discussion (on seat allocation) was done by Johor Pakatan, but I personally welcome them (Muda) to join the opposition.

"Component parties under Pakatan have been allocated more seats to contest in this election. So, we should not close any doors for seat negotiation with any parties, especially Muda.

"It will be better for them to contest under Pakatan so that we will not have too many multi-cornered fights," he said. 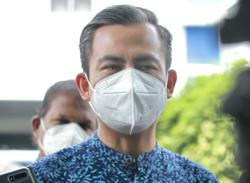