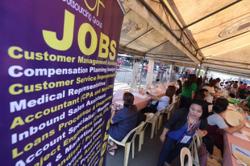 PUTRAJAYA: The Employment Act 1955 (Act 265) which provides that private sector employees be given 11 days of paid public holiday a year, does not apply to civil servants and other classes of employees who are not included in the First Schedule of Act 265.

The Human Resources Ministry stated that the employees included under Act 265 are those who earn RM2,000 and below.

The six remaining days are up to the employers to choose from the list of public holidays as per the First Schedule of Section 3 of the Holidays Act 1951 [Act 369].

According to the First Schedule, Chinese New Year is a two-day public holiday for other states except Kelantan and Terengganu.

This year’s Chinese New Year celebrations fall on Feb 1 and 2, which overlap with the Federal Territory Day on Feb 1.

"Therefore, private sector employers in the Federal Territories of Kuala Lumpur, Putrajaya and Labuan, who choose and list Chinese New Year as one of their company’s public holidays, must provide leave on Thursday (Feb 3),” it said in a statement on Saturday (Jan 29).

For employers who do not list Chinese New Year as a public holiday, they only need to provide a paid public holiday for Federal Territory Day only.- Bernama