PETALING JAYA: Unpredictable weather has been identified as a factor in the lack of chicken egg supply in the country, says the Agriculture and Food Industry Ministry.

Deputy Minister Datuk Seri Ahmad Hamzah said the weather affected many aspects of the agricultural sector, including livestock and fisheries.

In a press conference on Wednesday (Jan 26) night, he also said the floods and increasing cost of imported poultry feed had affected egg production.

“There is a trend in egg production where in January, output is reduced but it will pick up again in February,” he was reported as saying by Malay daily Harian Metro.

He added that the price also depended on supply and demand, while the floods at the end of last year and the Covid-19 pandemic also affected the labour force.

He also said the ministry had found that there were retailers controlling the prices of goods in the market, as reported by a local newspaper.

He said his ministry will work together with the Domestic Trade and Consumer Affairs Ministry to keep an eye on retailers who increased the price of goods without justification.

“We will supply the goods, the Domestic Trade Ministry will monitor the pricing,” he said.

Earlier, a newspaper claimed that the supply of chicken eggs of various grades nationwide was not only declining, but most supermarkets and grocery stores were running out of stock. 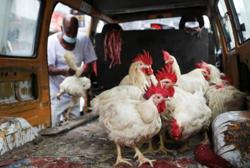