PETALING JAYA: Relaxing the standard operating procedure at the borders is a pragmatic move that must be done cautiously, say medical experts.

“The pandemic will go on forever with new mutations and names.

“We have to live with the virus which is here to stay,” he said when contacted yesterday.

Dr Raj added that opening borders to international travellers would help the recovery process, particularly for the tourism sector that had been badly hit by the pandemic.

Universiti Malaya virologist Prof Dr Sazaly Abu Bakar said borders could be opened with a caveat that every incoming traveller must prove that they were not infectious when entering and at least within a week after.

He said that more efficient and reliable detection methods were also needed at all entry points.

The decision on the matter would, however, be based on the recommendations of the Health Ministry.

On Tuesday, the United Kingdom announced that it would waive the Covid-19 test for fully vaccinated travellers entering the country beginning Feb 11.

Travellers who have received both doses of the vaccine will no longer need to take a test within two days of arriving in the UK.

Sweden also announced doing away with the requirements of the RTK-PCR test for travellers who were fully vaccinated and boosted.

“It (opening of borders) has to be done cautiously. Of concern are young children here who are not vaccinated,” she said.

Dr Sharifa Ezat also noted that Malaysia had yet to see a spike in cases involving the Omicron variant.“We have yet to see how the Omicron wave will develop especially with the recent festivities and the upcoming Chinese New Year and Hari Raya celebrations,” she added.Universiti Putra Malaysia epidemiologist Assoc Prof Dr Malina Osman also concurred that concern for public safety should be given priority.

“If we have good booster and vaccine coverage among children aged between five and 12, then it will be safe for us to proceed with similar measures to ease the SOP,” she said. 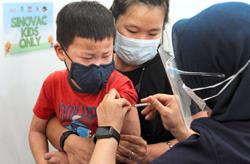