He said the Kafa Ihsan module was still in the final evaluation process by the Department of Islamic Development Malaysia (Jakim).

"Kafa Ihsan is an elective subject which is not compulsory for students but they are encouraged to take it," he said after attending the Sabah-level Multaqa Murabbi Ummah ceremony here on Thursday (Jan 27).

Idris added that the Kafa Ihsan module was different from the Islamic Education subject because it focused more on the added value of students' personal development and leadership apart from matters of worship.

In his speech, Idris said that in total, the Federal Government had channelled RM58,546,046 to imams, bilal, siak, takmir and Kafa teachers in Sabah this year.

He also said that starting this month, female Kafa teachers were eligible for 60-day maternity leave with full allowance. - Bernama 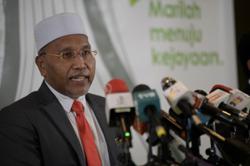