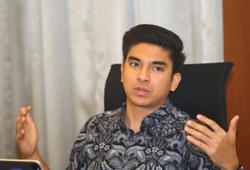 PETALING JAYA: PKR will use its own logo for the upcoming Johor election, while DAP and Parti Amanah Negara will stick to the Pakatan Harapan logo, says Opposition leader Datuk Seri Anwar Ibrahim.

“We have collectively decided that PKR will use its own logo and the others will use Pakatan,” said Anwar after chairing a meeting with coalition leaders at PKR’s headquarters in Merchant Square here on Wednesday (Jan 26).

“Seat negotiations have just been completed,” he said briefly before leaving.

Earlier, Anwar said Pakatan is open to cooperation with other Opposition parties such as Malaysian United Democratic Alliance (Muda).

Asked if they would cooperate with Parti Pribumi Bersatu Malaysia, the Port Dickson MP said: “It does not arise. We said Opposition. Is Bersatu Opposition?”

It is understood that seat distribution among Pakatan component parties would be based on the GE14 formula in 2018, where DAP contested 14, Amanah and PKR contested 12 respectively and Bersatu contested 18.

There has been talk that the 18 seats Bersatu contested in GE14 would go to other Opposition parties such as Parti Pejuang Tanah Air, Parti Warisan and Muda.

However, Warisan president Datuk Seri Shafie Apdal had said that the party had not decided if they would contest in Johor.

“People are more interested to hear about policies, reforms and charting the way forward to make Johor a fully-developed state which embraces diversity and moderation over ‘who will contest’ and ‘political strategies’.

“Muda will focus on that first,” said Syed Saddiq in a text message.

Prior to the dissolution of the state assembly on Saturday (Jan 22) evening, the state government led by Barisan had a simple majority of 28 (Barisan 16, Bersatu 11, PAS one) compared to Pakatan’s 27 (DAP 14, PKR seven and Amanah six) with one seat let vacant following the death of Bersatu’s Kempas assemblyman Datuk Osman Sapian.

The EC will have a special meeting on Feb 9 to decide on key dates and matters on the 15th Johor state election, namely polling day and nomination day.