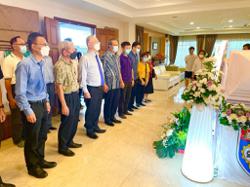 KAMPAR: All relevant stakeholders will be consulted before any decision is made to lower the speed limit in large cities, says Datuk Seri Dr Wee Ka Siong.

The Transport Minister said there were plenty of factors to be considered and the ministry would need to meet with affected parties before a decision is made.

“We have received suggestions to review (speed) limits in cities.

“However, there are many factors to be considered, and speeding is not the only factor that contributes to road accidents,” he said after launching a fundraiser held by MCA for the Universiti Tunku Abdul Rahman (UTAR) Hospital at the university here yesterday.

A Malay daily reported recently that the Malaysian Institute of Road Safety, an agency under the Transport Ministry, and Kuala Lumpur City Hall would be working to cap speeds at 30kph in certain zones in the city to increase road safety.

Both bodies would identify stretches of roads where the limit can be implemented, given Malaysia was one of the countries that ratified the “Stockholm Declaration” on road safety, with its 18 resolutions, at a global ministerial conference in February 2020.

The conference saw 80 ministers make a pledge to halve the number of road deaths by 2030 and proposed a speed limit of 30kph in areas where motorcyclists, motorists, pedestrians and cyclists mingle.

On the UTAR Hospital project, Dr Wee, who is also MCA president, said it will not be just a teaching hospital for the university but would also benefit the public.

“I believe this is a good project that will benefit all, especially folks in Kampar and Perak.

“The hospital is not-for-profit and is being built for the sake of the people and their health,” he said, adding that the cost of the hospital was about RM330mil.

The hospital is located within the UTAR Kampar campus and is expected to be operational this year in conjunction with the university’s 20th anniversary.

The first phase will have 250 beds for mainstream medicine, while 100 would be for traditional Chinese and ayurvedic medicine.

A further 250 beds for mainstream medicine facilities will be added in the second phase.

Donations for the construction of UTAR Hospital are still welcome, with details found at https://hospital.utar.edu.my/.