SIBU: The Sibu Municipal Council will announce the number of pigs butchered at the slaughterhouse in Jalan Ding Lik Kong here to address rumours of a pork supply shortage.

Ting said the butchering of pigs at the slaughterhouse was carried out from Wednesday to Sunday each week, while pork was sold on Mondays, Thursdays, Fridays, Saturdays and Sundays.

"Yesterday (Thursday, Jan 20), 242 pigs were slaughtered there, a decrease of about 10% from the daily numbers before the outbreak of African Swine Fever (ASF) in Sibu,” he said in a statement on Friday (Jan 21).

Three pig farms in the district were reportedly affected by ASF on Jan 10 and the Sarawak Veterinary Services Department took immediate measures to curb the spread of the disease.

As a safety and control measure, the Sibu slaughterhouse had also stopped handling animals from unlicensed pig farms.

Normally, 20 out of 100 pigs slaughtered there came from unlicensed farms. – Bernama 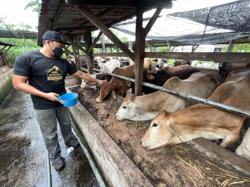 Jilted lover attacks ex-girlfriend's fianc� with parang in Putatan
It's the PM's prerogative to choose Zuraida's replacement, says KJ
Child porn and sexual assault: 25-year-old to serve 20 years with 19 strokes of the cane
Supply of raw chicken adequate, rising price due to higher demand
Ray of hope for dutiful, stateless 10-year-old Pei Yee and her dad
Malaysia wants further discussion of amendments to International Health Regulations, says KJ
Under-21 Selangor football player dies after collapsing at eatery
MySejahtera's monkeypox notification feature to be activated on May 27
HFMD: 57,510 cases reported from January to May 25, says Khairy
PKR members unhappy with polls delays and glitches