Prices of dry goods, clothing expected to go up by 10% this year, says Mydin boss 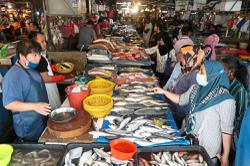 PETALING JAYA: The prices of dry goods and clothing is expected to rise by up to 10% due to higher costs faced by manufacturers and coupled with international trade issues, says Datuk Ameer Ali Mydin.

The Mydin Mohamed Holdings Bhd (Mydin) managing director expected the price of dry goods — such as biscuits, sardines and popular drink Milo — to increase between eight to 10% this year.

"We were told by many manufacturers that products will increase due to certain reasons (such as) the prices of raw materials and logistics costs having increased,” he was quoted as saying in Sinar Harian on Sunday (Jan 16).

He said clothing prices were expected to increase by 10% to 15% with new incoming stock, adding that the prices for school bags and school shoes have already increased.

However, prices of wet items are expected to stabilise.

"For wet goods, they have their own supply chain (for instance if there is) flood.

"All this could push the prices up," he said.

He pointed out that the increase cannot be blamed on the government as it involved international trade.

Sinar Harian also quoted consumer financial expert Prof Mohamad Fazli Sabri as saying that rising goods costs of around 10% to 30% would affect household spending, with a family that usually spends around RM2,000 a month expected to now spend an additional RM600 monthly — or an additional 30% more.

Among other things, Fazli suggested that households change their lifestyles and cut down on non-essential spending to cope with the price hikes, and suggested exploring the gig economy or digital economy as a way to supplement income when purse strings remain tight even after prudent spending.

He was also reported as expressing hope that the government would be firmer in enforcing monitoring towards price hikes and to help the public who are affected by the rise in living costs.